2012 Client of the Year Awards

Knoxville, Tennessee — The SCORE Greater Knoxville chapter celebrated “May is Small Business Month” by naming two local businesses as winners of its fourth annual “Client of the Year” contest. This year’s winners are examples of entrepreneurs who recognized a problem, created a solution, and began marketing it. 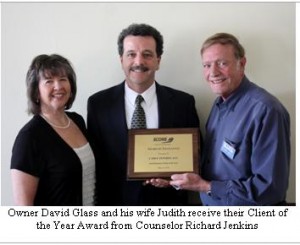 David Glass, an avid tennis player, knew that balls hitting the top of the court net reacted differently when playing on different courts and facilities. After discovering the cause was inconsistent tension of the nets on different courts, he solve the problem, by creating a device that measures and maintains a consistent tension, making the game of tennis fair for all players. He created Cable Tension LLC to manufacture and market the device, which he named TNT Gauge. Over the past year, It has been used in many professional and college tournaments, and will be featured in the US Open this summer. 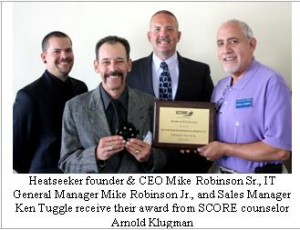 Mike Robinson, a veteran firefighter, knew that knew that periodic resting and cooling off was critical to the safety and health of fellow firefighters. Part of the cooling down “rehabbing” process is to “mist” the firefighters, but devices available to do this were too expensive for most volunteer and rural fire departments. He developed a device that uses a fire truck’s pumping system to produce a cooling mist, creating an inexpensive and readily available life-saving device. He formed Heatseeker Technology & Design LLC, and working with SCORE, created sales and promotion plans resulting in the device being purchased by fire departments across the country. He plans to expand its use into other areas requiring cooling, such as athletic fields.

For more information regarding starting or managing a current business, call the office at (865) 692-0716